How Game of Thrones used SMS to Engage Viewers 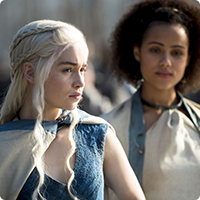 HBO’s Game of Thrones series is arguably one of the most successful shows in TV history, boasting an enormous avid fanbase which stretches to every corner of the globe. Each of last season’s episodes averaged an astounding estimated 19 million viewers.

To kick off the last season, HBO launched a mobile website and SMS subscription service in order to allow fans to keep in touch with the show and any news and updates. With Facebook and Twitter failing to suffice for such a large audience, HBO decided to use SMS as a further channel to reach their viewers. Unlike online platforms which would have struggled to reach such vast quantities of people, SMS provides a much more direct and personal manner through which to contact fans and keep them updated about current developments in the show.

Mobile Marketer published a recent article claiming that this service will be provided by SMS technology platform, Twilio, who themselves have stated: “Aside from direct engagement, Twilio SMS also gave HBO the flexibility and freedom to customise their message to distinct markets of fans around the world”. Within the 2 months following the launch, the SMS service is reported to have accrued 70,000 subscribers.

Creating a sense of exclusivity

This SMS subscription service is now globally referred to as “Three Eyed Raven’, referring to a storyline within the series, and commits to providing fans with access to sneak previews and inside information regarding what awaits them in the upcoming episode through the form of exclusive snippets of video content. This content is accessed via video links which are included in SMS broadcasts which themselves are time-sensitive, expiring after a short period of time. This added level of exclusivity amplifies the idea that subscribers are gaining access to content which is a privilege to view. Furthermore, as the videos expire after a short period of time, a sense of excitement is felt across the viewers, compelling people to react rapidly to the texts.