Latest Nokia Model Lasts a Month on One Charge! 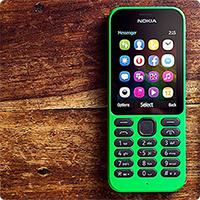 In January 2015, Microsoft unveiled a cheap, internet enabled Nokia mobile phone (Nokia 215), in a bid to help increase its market share in Africa, the Middle East and Asia. This no doubt, comes as a response to the huge growth of mobile communications including SMS messaging seen in these countries. Now, developing nations are demanding affordable, but capable handsets and low cost services to improve their communications. All kinds of organisations are already responding to this growth, by using SMS gateways to send bulk SMS messages to consumers/customers who have poor access to transport and electricity.

Nokia’s new handset is remarkably cheap, at a cost of just $29 (£29) and is equipped with the Opera Mini Browser and Facebook Messenger already built into it. The Nokia 215 also has the ability to run Twitter and a number of other apps if the user desires to do so. The 215 is however, a low-spec phone in comparison to more expensive models, with a 320 x 240 pixel display, a 0.3 megapixel camera, a radio and a torch as its main advertised features.

However all these elements are likely to help it pick up potential buyers in the budget market, particularly in the developing countries which Microsoft is hoping to target. The lack of highly developed technological features on the phone allow Nokia to concentrate on creating a robust piece of equipment, built to be extremely durable and containing a battery which Microsoft claim to last up to 29 days on standby.

Similar to the hardware, the software is too built for more difficult terrains, with more of the phones built-in apps able to function without a 3G connection.

Although features such as the torch may seem like a very trivial addition, Microsoft have stated that this will be particularly useful in the markets which it hopes the phone will be shipping to, for instance the 20% of the world which do not have regular access to electricity.

Microsoft first announced the model as its “most affordable internet-ready entry-level phone yet”, suggesting that it would be “perfectly suited for first-time mobile phone buyers or as a secondary phone for just about anyone”.

The growth of mobile industries in many nations around the world makes a good case for businesses to use SMS marketing to gain new customers and leads.