One of the Best SMS Marketing Tips: Create Exclusivity and Urgency 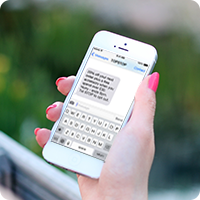 Connecting with your customers whilst they are on the go is more important then ever, and SMS messaging can be an effective channel to stay connected. However, when it comes to marketing via SMS, there’s no guarantee that customers will be engaged by your messages. In order to increase the odds of recipients reacting to your messages, your business can do well to create a sense of exclusivity and urgency about the offers that are made.

As text messaging is an instantaneous medium, real-time offers should be included in the SMS message. Whether they outline a particular product that is reduced or a current sale that’s taking place, the message should describe show a clear advantage to acting NOW. Businesses can achieve this sense of urgency by limiting response times to text messages they deliver and including expiration dates within them. Messages which include vocabulary such as “EXPIRES at midnight on 10/11” will be less likely to be ignored by subscribers.

Similarly, businesses could include limits on the number of customers who can claim offers, for example one well known pizza delivery company, offered a deal to celebrate the birth of the royal baby earlier this year where the first 100 customers to visit a number of their branches called Charlotte and with ID to prove this, would be treated to a free meal. This sense of urgency and exclusivity to those named Charlotte caused large numbers of people to rush to their restaurant in a bid to be within the first 100. Undoubtedly the numbers of visitors will have surpassed 100, however the sense of urgency will have increased the number of customers that for that day significantly and the extended levels of publicity will encourage others to visit in general.

Exclusivity is also a very valuable aspect of effective SMS campaigns. Businesses should aim to make their subscribers feel like they are part of something special and rewarding. If an offer is available to anyone and everyone it quickly becomes less appealing. If customers feel their loyalty is appreciated they are much more likely to make purchases. For this reason businesses can often benefit from keeping some offers exclusive to their subscribers or premium customers. An example of this can be seen with Amazon and its ‘Prime Members’, as on 15 July 2015 Amazon held its biggest sales day in history known as ‘Amazon Prime Day’. To celebrate its 20th anniversary this one day sale offered thousands of deals exclusively to its Amazon Prime subscribers, which pay a £79 fee a year for unlimited next day delivery.

An SMS marketing campaign that gained a lot of attention worldwide was launched by HBO in the form of an SMS subscription service which provided fans with access to sneak previews and inside information on the globally renowned Game of Thrones series. This is as the content was accessed via video links included in the text messages, which were time-sensitive and expired after a short amount of time. This successfully added a level of exclusivity, amplifying the idea that subscribers had gained access to content which was a privilege to view. Furthermore, as the videos expired after a short period of time, a sense of urgency was felt by viewers, compelling them to react rapidly to the messages.