What is an SMS Grey Route and Why is it Illegal? 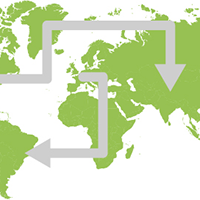 Over 2 decades after the first SMS was sent, text messaging has evolved into something which all of us take for granted as a means of communicating with anyone, anywhere in the world. However, during the earlier stages of SMS messaging, users were only able to send texts to a person on the same network as them.

A few years later, when the ability to text across networks arose in 1999, SMS messaging exploded, with users able to pay around ten times less than they would usually pay for quick phone call, by sending a text message instead. Then came the increase of users travelling internationally with their mobile phones, who obviously need a manner in which to text their loved ones and colleagues back home. This urged telecommunication companies (telcos) to set up international roaming networks and incorporate SS7 (Signalling System No.7) as a means to facilitate global P2P SMS. The key thing is that because most text messages that are delivered are also replied to, telcos to this day do not charge each other interconnect fees for sending P2P SMS across networks.

However, as technology advanced, there came a means through which to send SMS to immense numbers of mobile phones through computers, allowing a few companies to exploit the new SS7 system to send bulk sms messages without paying the networks that routed them. This was and sometimes still is done via grey routes. In order to do this a Global Title was required (a network identifier much like a host name on an internet network), but there also needed to be a way to send the messages through the networks. One example of a grey route involves the use of SIM boxes, equipped with tens to hundreds of pre-paid SIMs to send international messages, which appear to be sent by actual human beings. And because these P2P sim connections carry no fees between networks, these grey routes are hugely profitable for the aggregator. SMS grey routes are usually legal for the party on one end and illegal for the party on the other.

The use of grey routes by aggregators interferes with legitimate SMS traffic. Furthermore, it costs telcos a loss of millions of pounds in revenue each year. Therefore telcos have been forced to start aggressively cracking down on these grey routes and are more often than not will only deal with aggregators they trust and have signed a contract with, which utilise as few hops as possible.

Though not illegal, many aggregators also look to further maximise their profits by utilising the cheapest routes possible. This least cost routing (LCD), generally involves passing messages through multiple aggregators or ‘hops’, and though cheap, these routes are often very unreliable.

For these reasons, it is vital that businesses think before just signing up to the cheapest deal they are offered – if an aggregator offers an incredible deal which is almost too good to be true, it probably is. This is a well known truth in the industry. It is a much safer option to look for a legitimate SMS supplier who holds direct relationships with telcos or who doesn’t employ a multi-hop strategy. Though ultimately this may mean investing a little more money into, you can be sure as a business those vital SMS messages will be delivered to where they are supposed to be.